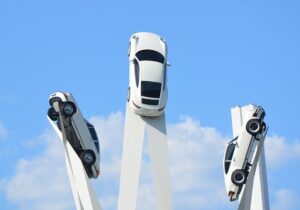 These models include the features of a standard car and a plane – that is, the way it was originally intended. But today these are not cars that can fly, but planes that can travel on the road in an emergency.

IPAL-V (Personal Air and Land Vehicle) Liberty is one of the first flying cars designed for series production in the Netherlands. This is a combination of car and gyroplane (gyroplane) – a recording machine that rises in the air with the help of a rotating main rotor. It is designed for two passengers with 20 kg of each load and accelerates to 160 km / h in 9 seconds. To use, you need a driver’s license and a driver’s license. The car has two variants: Sport € 300,000 and Pioneer for $ 500,000 (limited 90-car plan). Both models are available for pre-order now, but have so far only been confirmed by flights to Europe and the USA.

CityHawk is a six-seater car produced by Israeli Urban Aeronautics. It looks like a future SUV: the propellers are hidden in cylindrical casings, and the car sits on four wheels. The car can fly up and down horizontally due to two fan units – front and rear. The cylinders help the propeller to lift higher. Since 2020, CityHawk has been using hydrogen engines to make it more environmentally friendly.

AirCar is a flying car that turns a small plane in 2 minutes. In the summer of 2021, he made the first successful 35-minute flight between Nitra and Bratislava airports in Slovakia. The car was developed by Slovak company Klein Vision, and its founder, Stefan Klein, drove it himself. According to the developers, AirCar is capable of flying up to 1,000 km at an altitude of up to 2.5 km, at a speed of 190 km / h. The car is equipped with a 160 hp BMW petrol engine. and is capable of carrying two people and loads weighing up to 200 kg. It took about two years to build it and it was about € 2 million.

The other two groups are represented by vehicles that can only travel in the air (excluding speed speeds). They are designed first of all for commercial commuters, often – freight forwarding.

Volocopter is a German company that manufactures various types of flying cars. One of them is a two-seater model VoloCity, an ultra-light machine with 18 rotors, firmly attached to the axles of electric motors. Copter has a top speed of 110 km / h and gains up to 1,980 meters. Its maximum weight – including the device itself, passengers and cargo – is 450 kg, and its flight distance is one price for 35 km or one hour. You do not need a pilot’s license – just five hours of training is enough.

Volocity is certified according to European Aviation Security Requirements (EASA). It has already been successfully tested at Helsinki Airport and central Singapore and is scheduled for use during the 2024 Olympic Games in Paris.

When will we start to fly taxis?

While major concerns for cars and aircraft are releasing their types of flying vehicles, in the United States, Europe and Asia, they are developing state-of-the-art airline and commercial transport systems. Authorities hope that this will help the city’s roads to cope with traffic congestion and dangerous evacuation. Manufacturers and carriers hope that flying cars will open up new and promising markets for them. A state-of-the-art reception area could play an important role here, such as promoting electric vehicles – as a green alternative.